CDFA will offer a third round of Alternative Manure Management Program (AMMP) grants for 2019. This grant awards a maximum of $750,000 for flush to scrape conversion, installation of a manure separator, or pasture management (including compost bedded pack barn construction). For additional information or technical assistance to submit a grant, please contact William Hart.

California’s agricultural sector is a vital part of the California economy and California’s agricultural production is critical to global food security. Agricultural operations are also vulnerable to climate change. As the State moves forward to achieve its greenhouse gas (GHG) reduction goals for 2030 and 2050, we must also ensure that the agricultural sector remains vibrant and strong. The installation of onsite renewable energy offers agricultural operations an opportunity to reduce GHG emissions, increase energy reliability, and realize the benefits associated with reduced demand for grid electricity. To support this opportunity, the California Energy Commission is implementing the Renewable Energy for Agriculture Program (REAP).

A needs assessment is currently being offered to determine the critical needs of North Bay dairies and help develop UCCE’s Dairy Advisor program to promote industry sustainability. Complete the survey and the UCCE Dairy Advisor, Randi Black will send you a $25 Friedman’s gift card! The survey can be taken online or you can return the completed survey sent to you a few weeks ago; postage is already paid! If you need a new survey, contact Randi.

The survey takes approximately 15 minutes and all information will be kept strictly confidential.

If you have already filled out the survey, thank you! If you have yet to receive your gift card, please email Randi Black.

“Frankly if we had another year of drought, that fish could be gone,” reported Dr. Robert Lusardi, a research ecologist and salmon expert with UC Davis.

“The key to restoring steelhead trout and salmon is promoting the habitats,” Lusardi said.

He identified numerous areas where California could work to ensure that the state’s salmon population isn’t totally wiped out within 50 years, as he emphasized, for example, a critical need to re-establish floodplains along the Yolo River.

Similar projects in the North Bay have appeared to bear some good results.

In Sonoma County, the Gold Ridge Resource Conservation District worked with the Thomas Creek Ranch Homeowners Association to restore lower Green Valley and Thomas creeks in Forestville as a winter coho salmon wetland habitat several years ago. Only recently, in the aftermath of the last drought, have those efforts borne fruit.

In Marin County, meanwhile, officials are cheering the performance of newly restored floodplains on Lagunitas Creek, one of the most productive coho salmon creeks in the state.

Soil Health is one of the main tools that will help sustain farms in the future. It will help us feed the world. NRCS recognizes four principles of soil health. They are very basic but can be applied many different ways to any agricultural system. Here is how Matthew Craighead implements them on his forage fields.

Diversity is the spice of life; except for very specific instances Matthew avoids monocultures. When most people think of monocultures they think of annual crops, but it is very easy to get into a monoculture perennial forage system without realizing it. In his region of Tennessee, a lot of farmers’ pastures have turned into monocultures of fescue when it is cool and crabgrass when it is warm. This locks them into depending on these two species making a crop as well as reducing the biodiversity in the root system.

When Matthew is planting perennial pasture he normally does a minimum three species planting mix depending on what his goals are. Some of his favorite grasses for his area are fescue, orchardgrass, bromegrass, and crabgrass. He normally mixes some annuals such as triticale or rye in. For clovers he likes red and white with a little crimson mixed in.  Matthew is a big fan of small amounts of vetch.  He also likes mixing a small amount of tillage radishes in. This biodiversity means something is always growing and there for his animals to eat. It also provides multiple root structures for the microbes in the soil.

Watch this http://www.farmers.gov Grow and Tell video to learn how Jen takes care of her microbes, and how they take care of her plants. 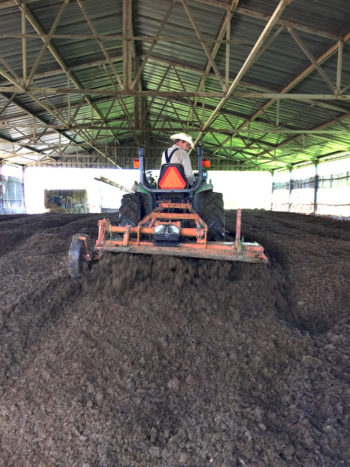 At the outset of last month’s Global Climate Action Summit in San Francisco—even before the release this week of a dire U.N. climate report—California Governor Jerry Brown made a bold announcement, setting a target for the state—the world’s fifth-largest economy—to achieve net zero emissions by 2045.

California has taken on a heightened role in climate diplomacy since the United States’ 2017 withdrawal from the Paris Climate Agreement. But even insiders were stunned by Brown’s wide-ranging executive order. Ecologist and incoming executive director of climate advocacy organization Project Drawdown Jonathan Foley hailed the move as “the most ambitious serious climate commitment ever made on earth.”

Brown has signed a number of bills spelling out how California might achieve its goal, including SB100, which commits the state to 100 percent carbon-free electricity by 2045, as well as a series of bills intended to increase the adoption of electric vehicles. But missing from the flurry of legislation are concrete plans for the future of food and agriculture.